William Joseph Knittle Sr., “Bill”, was born January 16, 1916 in Williamsport, Pennsylvania. He was the third child of Harry Emerson Knittle and Elizabeth Agnes Sommer. He was a sixth generation son of Lycoming County, Pennsylvania. His father was a mechanic and an only child. His mother was born in Baltimore, Maryland. She had 14 siblings.

His Catholic family lived a few doors away from St. Boniface Church and School. He attended the school along with his siblings. He felt closest to his older sister Anna, who “mothered” and protected him at school and home.

As one can imagine, with 12 siblings, he had many stories to tell of fun times and sad times. The boys used to scare their mother nearly to death with their antics and dare-devil actions. There was sledding down the steepest streets in town during the winter, each taking turns looking out for traffic; daring each other to walk through the cemetery at dusk, etc.

All the babies were born at home. As each new child came along, the other children were allowed to have a quick peek at them after a week or so and then Mom and baby continued to stay in the upstairs bedroom for about a month. When Richard was born, he was very sickly. He could not digest his milk. He died just before turning one year old.

In 1937 his younger sister, Elizabeth, died of tuberculosis. Only a few hours later, across town, his older brother Harry, died in an automobile accident. This was a very difficult time for the family. It was after this that Bill began to not like the telephone. To him it seemed that most of the time it rang it was bad news.

Bill loved food and he loved to eat but he could not stand to eat creamed corn. There was little food to feed the huge family, so his mother would buy the corn because it was cheap. Then she would put it on top of the food to make it stretch, thus everything tasted like the corn. He never wanted to be late for dinner because if the food was gone, there was only the corn left to eat. The boys would take a shortcut through the cemetery to get home before only corn was left.

As a young child, one of Bill’s earliest memories was of the trombone. He fell in love with it and learned to play it. In high school he played in the marching band. He was very good.

One day in 1932, at the age of 16 and during the Great Depression, Bill and the other children were looking for food to eat. They were so hungry. When they found only a box of oatmeal in the cupboard, they began to eat it dry. The only time Bill cried as an adult in front of his children was in telling this story. He made an important decision at that time that would change the rest of his life.

Bill picked up his trombone and left home seeking a job playing it in a band in New York. He did secure a position with the Larry Funk and his Band of a Thousand Melodies and played with him for many years. He sent most of his money home to his mother to help feed his siblings. He became a hero to them and his hometown. The orchestra played on the radio and the family listened to him with great pride.

For the next 10 years he belonged to several orchestras and dance bands. He traveled around the country in tour buses and played in 46 of the 50 states. He loved every minute of this time period and talked of it often to his children and grandchildren.

At one time, an article was written about him in the Musician’s Union Magazine because he was the first trombonist to hit high C above high G. He could make his trombone sound like a trumpet. There is a old recording of him while on the radio playing “Sugar Blues”, which was originally played by a trumpet. He sounds just like the trumpet.

After Larry Funk broke up his orchestra, Bill played with several other bands. While on the road with a dance band in 1941 he met Lahlee Duggins, a dancer in the show. They fell in love and married a short time later.

Lahlee was from Tulsa, Oklahoma. While visiting there, Bill had an occasion to see and meet Bob Wills of the famous Bob Wills and his Texas Playboys Band. At that time, Bob had decided to add a brass section to his band. Bill was hired by Bob Wills to play his trombone. Unfortunately, this position did not last very long. Bob decided to do away with the brass section.

Bill and Lahlee then joined up with another show band; the Woody Wilson Hotel Band. They were married 6 days before Pearl Harbor in December 1941. They continued to travel with the band and in 1942 Raymond George Knittle, their first son was born in Austin, Texas. Shortly after that, because of the War, they decided to quit the road life and Bill found work in Santa Monica, California at the Douglas Aicraft Company. He continued making planes until the war was over. During that time another child was born, William Joseph Knittle, Jr. They also bought a small house in Venice, California and there raised their family.

At the end of the war, Bill had no job and traveling on the road was no longer an option. One day he picked up a bucket and got on his bicycle and started washing windows for a living. He did that until two days before he died at the age of 69. Later, he also painted signs and especially enjoyed painting Christmas scenes on the windows for his customers at holiday time. He was quite successful and proud of the fact that he had no boss to work for but himself.

His only daughter, Susan Quentine Knittle, was born in 1948. A year later in 1949 Richard Michael Knittle was born.

Bill always talked of his days on the road. He loved music and taught his children and grandchildren to love it too. His world revolved around music. No matter where he was, if he heard a song, in an elevator or while grocery shopping, etc, he would stop and tell his children everything about the song; who wrote it, what band played it and then teach them the words. He taught himself to play the piano and spent that time teaching more about music and songs to his children.

He never again played in a big band on the road but he did play occasionally on the weekends for dances and parties,etc. He stayed in touch with other members of the bands and always remained a member of the Musician's Union. During the last 10 years of his life he played with the Los Angeles Philharmonic.

Being the greatest father in the world, his children always came first in his life. He spent all of his free time with them and also took them with him when he worked if he could. He was involved in all of their activities. He was a story teller and kept all of his children, grandchildren and nieces and nephews entertained with his tales. He taught his children how to pray and to read and write. He made learning anything easy and fun.

The most important thing he taught his children was to be honest. That was so important in his life.

He had an open and inquiring mind. He never fnished high school but believed education to be important and he was always attending classes and reading about new things. Two of his children went to college and received degrees.

Bill was a kind, loving, gentle, moral, honest, witty, creative and religious man, father, husband, brother, son, uncle and friend. Everyone loved him and respected him. His sense of humor made everyone laugh. He is very loved and very missed by his family and friends.

For those who would like to know more about Bill's life, I have written a book about his early years. It is available on Amazon.com. A description follows:

This historical biography about William Joseph Knittle Sr. unfolds during the Great Depression, a very difficult time in the history of the United States, which lasted from 1929 through 1939. It moves into and through the World War II years. The story begins in Williamsport, Pennsylvania when he was only sixteen years old. With just his trombone, the few things he could carry, a couple of coins in his pocket and the dreams and determination of playing his music with the big bands, he left on foot hoping to make it to the big city. One foot in front of the other, he made his way alone during the worst year of the Depression when millions of other people were on the road penniless and homeless looking for ways to care for their themselves and their family members.Why did he leave home? What happened to him on this journey? Where did he go? How long did it take him? What did he see? What did he do? Who did he meet? Did he make it to the big city? Did he play his trombone with the big bands? Did he fulfill his dreams? Did he ever return home? All of these questions and much more are answered as his story unfolds. 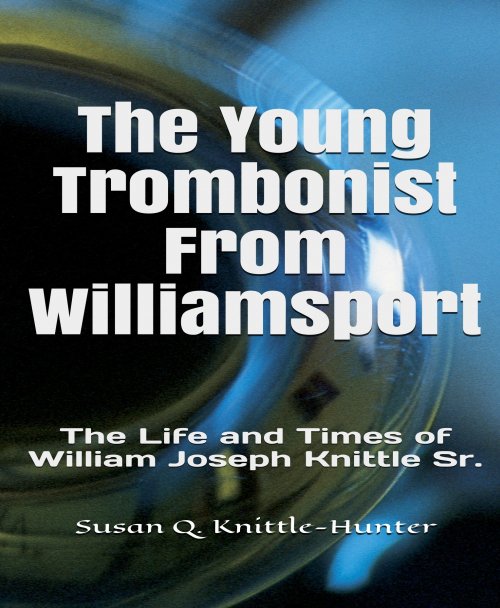 This Knittle & Duggins Genealogy website is a work in progress. Please check back often for updates.

If you have information that you would like to have included on this website or if you find a mistake please contact me.
The information included in this website is intended for informational purposes only, but please include us in your references. All of the information and ideas originally produced by Knittle Duggins SRC, Knittle & Duggins Genealogy, Periodic Paralysis Network and PPNI Publications are protected under US Copyright Laws (2020).This page and the information it provides may not be copied for commercial use of any kind without written permission.